The Montblanc Star Legacy product line takes its inspiration from Minerva’s heritage and the company’s pocket watches that were made during the late 19th and early 20th centuries. Orbis Terrarum comes from Latin, meaning “globe”, “earth”, and “world”, providing the inspiration for the Montblanc Star Legacy Orbis Terrarum. The timepiece is powered by an automatic movement equipped with a Manufacture complication. The idea is to propose a worldtime function, simple to set, read and easy-to-use in an intuitive way, combined with an elegant aesthetic. Once set, it indicates all 24 time zones at a glance and shows whether the cities are in the daytime or night-time. While travelling, the timepiece is easy to set thanks to a single pusher. The dial is composed of an upper sapphire crystal rotating disc with applied 3-dimensional rose gold-coated Northern Hemisphere map and meridians surrounded by a ring depicting the 24 cities of the 24 time zones. Below this sapphire disc appears the day/night disc rotating in 24 hours, alternating from light brown for the day to dark brown for the night. A red arrow is located at 12 o’clock to point toward the city of the owner's local time zone. The timepiece comes in a 43 mm polished Au 750/1000 rose gold case, combined with satin-finishing on the sides, and is limited to 500 pieces. 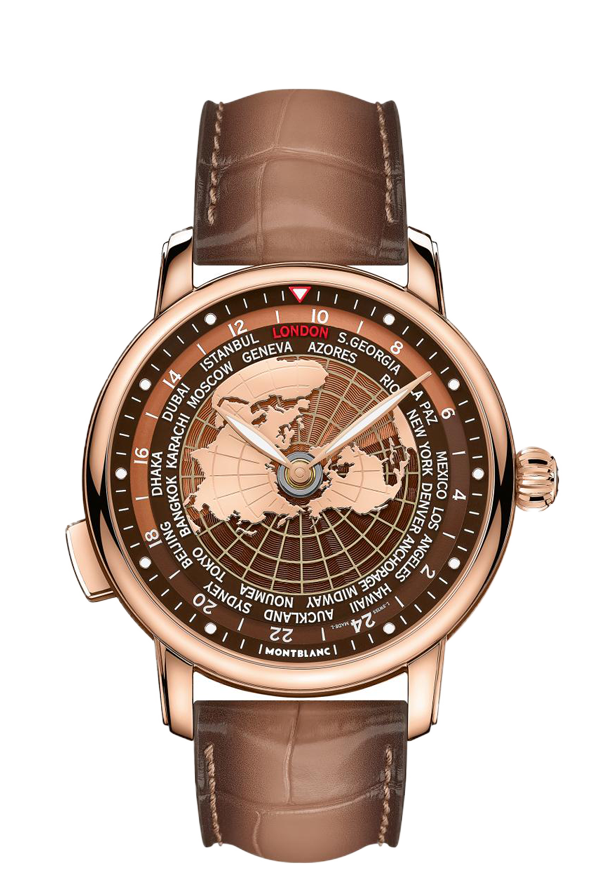